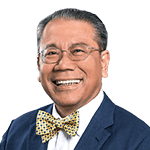 Dr. Sok Siphana is a practicing attorney and the Founding Partner at SokSiphana&associates, a law and consulting firm specializing in international trade and corporate law in Phnom Penh. He was appointed by Prime Minister Samdech Techo Hun Sen concurrently as Advisor to the Royal Government of Cambodia and Advisor to the Supreme National Economic Council with the rank of Minister in August 2009 and November 2011 respectively. He was reappointed as Senior Advisor to the Royal Government of Cambodia in September 2018 with the rank of Senior Minister. He serves currently as the Chairman of the Board of the Asian Vision Institute (AVI) and previously as Chairman of the Board of the Cambodia Development Resource Institute (CDRI), Cambodia’s oldest and most prominent independent research institute.

During Cambodia Chairmanship of ASEAN in 2012, Dr. SOK was attached to the Deputy Prime Minister and Minister of Foreign Affairs where he served, among other advisory functions, as a Member of the ASEAN Task Force on Substantive Issues, ASEAN India Eminent Person Group Co-Chair, Cambodian Sherpa to G20 and High-Level Cambodian Representative to G20 Development Working Group. In the lead to Cambodia hosting the 13th ASEM Summit in 2020, he was entrusted with the responsibility of ASEM SOM. From 2011 to 2018, he was also a Convenor of a weekly 45 minutes “Cambodia’s Global Dialogue” policy talk show on South East Asia TV (SEATV).

Previously from 1999 to 2005, he served as Secretary of State at the Ministry of Commerce, where he worked extensively on issues related to trade policies and development, commercial legal framework, and economic integration. There, he was the lead negotiator in Cambodia’s accession to the World Trade Organization (WTO) in 2003. From October 2005 to July 2009 he served as Director at the International Trade Center (ITC) a joint technical agency of UNCTAD and the WTO in Geneva, Switzerland.

From 1993-to 1998, he was the legal expert for the United Nations Development Programme attached to the Council for the Development of Cambodia.

“He is dedicated to inspiring young Cambodians and empowering female entrepreneurs.” – Editorial Feedback